Why can't they just be friends?

May 16, 2018
Why can't my kids just be friends?  I must ask myself this question hundreds of times during the week.

I thought that having kids relatively close together was going to be great.  They'd have a playmate and an automatic friend.  However, the truth is that - most of the time - they don't get along.  It's not that they're enemies...it's that they drive each other crazy.

They don't want to share their toys.  Then, they play together only to then get mad and purposefully break the other sibling's toys.

They want to get the other one in trouble so that they look like the "good" child and get more rewards.  Then they get upset that the other sibling got them in trouble when they *tattled* on them.

At mealtimes, they want to sit where the other one is sitting.  They want the cup the other sibling has.  Their meal has more or less than the other child.

They put the other sibling's toothbrush down the sink drain or in the toilet (which is always fun and easy to get out - *insert sarcasm*).

They cut the other sibling's hair.

They pick and pick and pick at each other, knowing exactly which buttons to push to make the other sibling go over the edge.  Then, they act innocent and like they don't understand why the other person is so upset.

Do your kids do this, too?

Then, I remember that I did the same thing with my siblings.  It almost makes me want to apologize to my mom...but then that would be admitting that it wasn't always my sisters' faults. ;) 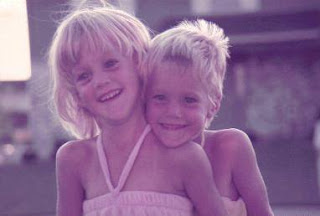 Popular posts from this blog

I'm no longer telling my kids to have fun

April 22, 2016
Today, I've made an important realization that is changing the way that I talk to my children.  I am no longer going to tell them to have fun. Don't get me wrong, I desperately desire that my children find joy, happiness and laughter through numerous experiences and adventures.  But, my children's definition of fun and mine have two VERY different meanings. I'll give you an example. My almost four-year-old son loves to destroy things.  He's like his dad - a man who just wants to learn how things work, as well as cause and effect.  So, he takes apart toys, sister's dolls, kitchen appliances, and more.  He tears books because "the story was in the wrong order."  He pushes buttons - both literally and figuratively.  He colors on walls, floors, computer monitors, furniture, carpet and more because he wants to create maps and "building plans" for his Duplos.  This is his idea of fun . Do you see my dilemma?  His idea of fun is so completel
Post a Comment
Read more

February 16, 2018
In business, leaders often analyze our Strengths, Weaknesses, Opportunities, and Threats through a SWOT analysis.  So, if we are going to look at our role as moms as being the greatest leadership opportunity to us, let's start with analyzing ourselves and our kids.  Here's the SWOT I developed for my family: Family SWOT Analysis As a doting mother, there are hundreds of strengths that I could put up here for my kids.  Their hugs, kisses, bedtime stories and prayers, the fact that they come to me when they're seeking healing from an injury (physical or emotional), the notes and drawings they make for me, their precious hearts when they try to help me or that they've learned how to use the Keurig to bring me coffee in the morning...I could go on and on. Now, here's the part where we get honest with ourselves.  Yes, we love our kids and we love our family (or, hopefully, most of the time), but we are not perfect.  Nor should we be perfect.  As we analyze oursel
3 comments
Read more

July 13, 2010
As mentioned in my previous blog, cloth diapers are not your momma's cloth diapers any more.  Now, the lingo can be daunting.  There are AIOs, AI2s, diaper covers, doublers, fitted diapers, flat diapers, hybrid diapers, inserts, liners, one-size diapers, pocket diapers, and prefolds. When I first began my cloth diaper research, all of the different options overwhelmed me, and I didn't know where to begin.  So, I did the only thing I knew to do...I asked other moms! While every mom will have a different story to share with cloth diapers, you still get some very good information.  I learned why moms liked the diapers they chose, some of the downsides, and the costs to the different diaper systems.  I also began to develop my own decisions on how I wanted to start the cloth diapers.  When I first thought about using cloth diapers, I was dead set against anything that wasn't an all-in-one (AIO).  These are the Porsches of the diaper world.  There's no messing with diaper pi
Post a Comment
Read more